Born in North America, Bob spent his formative years fishing and trekking amongst the rugged Canadian mountains, rivers and lakes. Influenced by his childhood surroundings on the Canadian Shield, he has an ingrained appreciation, and innate love for rivers and respect for hydrologic processes. It is his natural affiliation with water that inspired him to become a Hydrologist. Throughout his career Bob has traversed the field of applied water resource research including hydrology, hydrogeology, and the biophysical sciences both in the public and private sectors.

Fulfilling a personal lifestyle goal, Bob moved to New Zealand in 2010 and joined the WGA office in 2017 as Principal Hydrologist. Now Regional Manager, Bob leads the WGA New Zealand team with over two decades of experience in the implementation of innovative solutions to water management issues. Throughout his career Bob has demonstrated an inherent ability to act as a catalyst around ground water management, leading him to develop and steer ‘first of their kind’ catchment-scale aquifer restoration projects in North America and Australasia. In the Pacific Northwest (USA), he led the first Managed Aquifer Recharge groundwater replenishment programme aimed at restoring aquifer levels and riverine baseflows for the recovery of critically endangered salmonids.

Bob’s stakeholder and leadership skills have thrust him to the forefront of his industry, winning the Watershed Management Council’s National Walter C. Loudermilk Award for helping restore flow and habitat to one of America’s Top Ten most endangered rivers.

A ‘systems thinker’, with an intuitive ability to establish valuable relationships in the community, Bob leads with a holistic approach. He possesses an intrinsic capacity to facilitate change and is driven by the desire to fundamentally improve water sustainability.

His propensity to tackle large scale issues with conviction has seen Bob spearhead the development of two nationally recognised MAR pilot testing programmes in New Zealand. Working closely with multi-stakeholder partnerships on both the North Island (Gisborne) and South Island (Canterbury), these projects are the first of their kind in developing Groundwater Replenishment Schemes (GRS). These ‘systems approach’ to water management help us prepare for the challenges of climate change, growing populations and the related water scarcity issues.

Recognising the importance of addressing water quality and storage issues, whilst working to restore and protect environmental and cultural values, Bob would like to be able to write guidelines for Aquifer Recharge management across New Zealand. Aside from leaving a valuable legacy, the guidelines would be used to ensure the long term sustainability of water management in New Zealand, and provide a working example of sustainable groundwater management to the world. 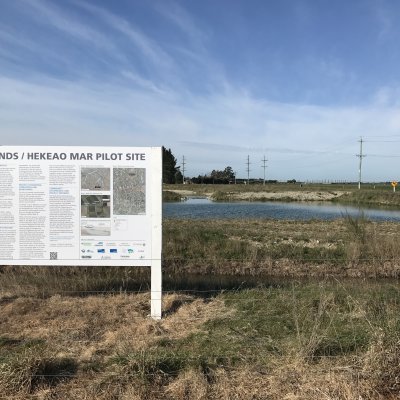